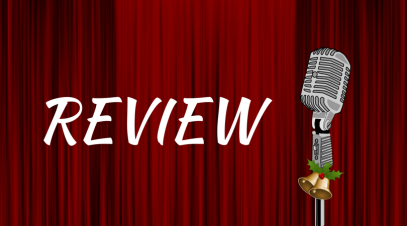 “Hey, wait a minute.  Is that guy seriously playing ANOTHER part??!” This is what I found myself thinking, several times during the early moments of Friday’s performance of It’s a Wonderful Life at Van Wert Civic Theatre.  As a rule, unless it’s called for in the script, I am not comfortable with multiple roles for actors.

But just as the thought occurs to me, another forces its way into my head.  This is written, specifically, as a radio play. The listen-at-home audience of a radio show can’t see who’s playing what part.  They only hear voices.  If an actor is good at different kinds of speech patterns and inflections, the listener will never catch on.  It took me several occurrences of this thought process, to finally come to terms with what the playwright is doing. I certainly hope the audience members around me were quicker on the uptake than I was.

The play is adapted from a book by Joe Landry, although perhaps I missed who did the adapting.  It is a fairly faithful rendering of the actions and events portrayed in the famous film of the same name, featuring James Stewart and Donna Reed.  So faithful, that at times, I found myself mouthing or whispering the lines along with those charged with saying them.  For anyone who loves this movie, much of the lessons, the emotions, and the fun of this production will make you smile; perhaps it will fill your heart with heavy feelings.

Director Danielle Slagle was faced with a huge challenge.  Originally this slot in the season was supposed to have featured the non-radio version. It became obvious that males for that show were not coming to the audition.  It was quickly decided to do this version, and Slagle had to change much of her preparation, I am sure. She did a very nice job bringing this somewhat quirky rendition to life.  There were many standouts shining in this play.  I shall try to touch on a few.

To begin with, an old friend, Jerry Hertenstein, opens the radio show as its emcee Freddie Filmore. Hertenstein has an easy-going attitude, which ingratiates himself to his audience.  Later I was to see he also plays the blundering, Building and Loan employee, Uncle Billy.  It is good to see Jerry, who at one time wrote these types of reviews for The Lima News, performing in such a show.

The role of the adult George Bailey, our prototypical hero, is a difficult one. George’s face must be a constant revolving contrast of enthusiasm, frustration, and pain.  In this, local actor Joe Maurer was master of expression. In order to youth-en (Not really a word, boys and girls!) himself up, Maurer chose to lose his typical facial hair.  This allowed his entire face to be an open book for the audience. He had nice turns as the reluctant stay-at-home executive, the sometimes naive husband and friend, and the man sometimes unable to control his temper. This actor needs to carry the show, and Maurer was up for it.

Playing the Donna Reed part, Mary Bailey, is a veteran of many VWCT productions, Emily Gehle. I knew the vast age difference between Gehle and her co-star Maurer, but I doubt whether those who didn’t could spot it.  Gehle acquits herself well, playing up to her paramour.

Fort Wayne resident, Steve Bricker, did a bang-up job as Clarence, the angel who need to save George in order to earn his wings. The fun action that was in the film, could not be replicated on a radio stage, so Bricker had to work extra hard to get his audience’s favor.  He accomplished this with ease.

Of course, failing to mention our bad guy would be a serious omission.  No matter what Ed Eichler is asked to do, he always makes the part his.  But Eichler is especially good at playing obnoxious and mean characters. His turn as town bully, Mr. Potter, was just what was needed.

A couple of the things which pleased me were somewhat meaningless, it would seem, but they helped my appreciation for our story.  As with all radio shows, sound effects people are necessary. Travis and Whitney Nihiser did splendidly making the various sounds, almost lifting me out of my seat with the car horn.  It looked like they were having fun. Another item that made me smile, was the little youth chorus which helped out with the commercials which were often presented.  Seeing the young people featured so, in a “big people” show, thrilled and gratified me.  Quite an experience for them, I am sure.

It became very clear to me that the cast assembled for this production had a sweet time making it happen.  The assembled viewers picked up on this, perhaps a bit slowly, but by the middle of the first act, they were all over this story.  It was the usual bonding opportunity for the cast and crew, and their chemistry made the production a smooth and enjoyable one.  See it if you can! Remaining show dates include December 7, 8, and 9 at 8:00 pm and Sunday, December 10 at 2:00 pm. Call the VWCT box office at 419-238-9689 to reserve your seats today.