THE LAST FIVE YEARS, directed by Linda McClure, played May 2013.

The final production of the 2012-13 season was The Last Five Years.  This the story of an ill-fated romantic relationship between Jamie, an up-and-coming author, and Cathy, an aspiring actress. Through nearly constant music, this show explores what happens when a fragile romance encounters the success of one partner and the failure of the other. The two characters each tell their side of the story. Cathy moves backwards in time from the end of their marriage to their first meeting, and Jamie moves forward in time from the early heady days of their romance to its sad ending. On the way, the audience is made privy to the fun and laughter as well as the pain and sorrow of a relationship that, in the end, just didn’t work. 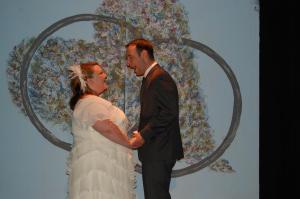 The cast for The Last Five Years is small, but, boy, are they mighty! Dan Stanowick from the Lima area will be singing the role of Jamie. Dan has worked a lot with Encore Theatre in Lima, both onstage and behind the scenes. He also helped us out a few years ago when we needed to replace Bob Howell in his lead role in The Full Monty at contest (Bob had a close encounter with a surgeon then!). A great guy and a wonderful talent–welcome back to Van Wert, Dan!

Samantha Henry, a newcomer to the VWCT stage, has been cast in the role of Jamie’s wife, Cathy. Sam is from the Findlay area, and she is active in Fort Findlay Playhouse. Her last role was in FFP’s production of Titanic. Performing in this show has been a dream of Sam’s, and we’re more than happy to help her realize this goal.